Retirement Savings By Age – Are You On Track?

The COVID shutdowns brought a lot of uncertainty to the market and temporarily took a big chunk out of a lot of peoples’ retirement savings. Fortunately for older Americans, a strong market rebound in 2020 and early 2021 helped put disciplined savers back on an even keel. How are most people doing when it comes to retirement savings, and how do you compare?

According to the most recent Survey of Consumer Finances, a tri-annual survey under the auspices of the Federal Reserve, the average total retirement savings balance for all families nationwide was $255,130. But that number is skewed higher by a relatively few people with very high balances. The median figure is much lower, at about $65,000.

Table of Contents
Let's Look at the Data
401(k) Contributions
Retirement Savings By Age: Are You on Target?
What to Do if You’re Behind

Let's Look at the Data

That number by itself isn’t very instructive: While a 63-year-old with $65,000 in total retirement savings and no pension would be in a very dire financial position, a $65,000 balance would be very impressive for most 27 year-olds at the outset of their careers.

It’s much more useful to break out these retirement balances by age. But even then, things don’t look great.

Many younger workers, just starting their careers, may not have access to retirement plans at work. According to Federal Reserve Data, fewer than half of workers under age 36 have retirement accounts at all.

These younger workers also tend to have lower incomes, while non-discretionary expenses like housing, transportation, and student loan payments take up a large and growing percentage of their incomes. Housing costs, especially, have increased in recent years, putting a significant crimp on their ability to save.

Meanwhile, according to Federal Reserve data, the median student loan payment is over $200 per month.

The 2019 Survey of Consumer Finances also broke out total retirement savings balances by the age of the head of household:

For workers ages 75 and older, we see balances declining as they spend down assets to generate retirement income: The average household balance headed by someone age 75 or older was $357,920, while the median balance was $83,000.

Fidelity Investments recently published a similar data set, broken out by age, though it only included 401(k) balances. Other types of retirement plans, such as IRAs, SEPs, SIMPLE IRAs, 403(b)s are excluded, so overall balances are lower. But the data is instructive because it includes the amount of retirement income each age cohort is contributing to their 401(k) plan.

According to data from Fidelity Investments, as of the fourth quarter of 2020, the median 401(k) account balances for each of these age cohorts were as follows:

Workers contribute a higher percentage of their incomes to their 401(k) plans as they get older, as well. The youngest workers contribute the least, at 7.4% of income, while the median contribution of older workers ages 70 and up is 12.3%.

As it is, however, these levels of retirement savings may be inadequate. A common rule of thumb is that workers should contribute about 15% of their incomes to 401(k)s and other tax-advantaged retirement plans. This is in addition to non-retirement savings for emergency funds, education expenses, and major purchases such as automobiles and for a down payment on a home.

Fidelity Investments analysts recommend setting a goal of accumulating ten times your income in savings by the time you reach age 67, which is the Social Security full retirement age for most readers.

The idea is that drawing down not more than 4 to 5% of your retirement account balances each year should provide 45% of your pre-retirement income, with the rest coming from a combination of Social Security benefits and private savings. Drawing down your retirement balances faster than that rapidly increases the likelihood of running out of money in retirement – especially if there is a bear market in stocks around the same time you retire.

Related: At What Age Should You Start Taking Social Security? 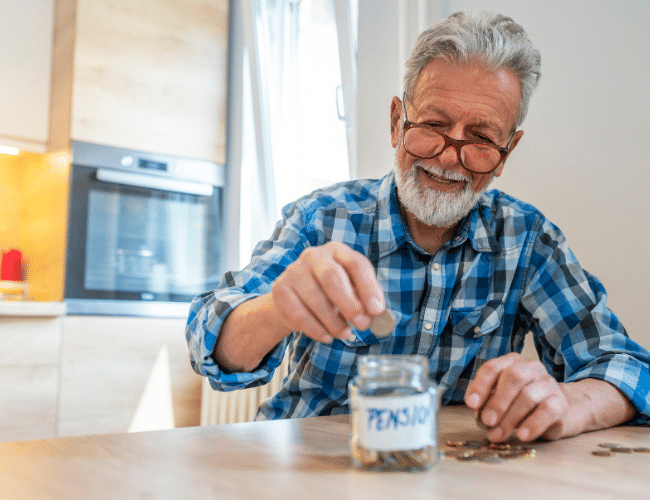 Retirement Savings By Age: Are You on Target?

For many younger workers, age 67 may seem very distant. And the danger is that your long-term retirement savings plans may be continually derailed by seemingly more pressing concerns.

To reach the goal of having ten times your pre-retirement income saved by the time you reach retirement age, Fidelity’s analysts have developed the following series of benchmarks:

By meeting these interim savings goals throughout your career, you may be within striking distance of meeting the recommended goal of saving ten times your salary by the time you reach age 67.

Given historical market rates of return and reasonable income increases over the course of your career, setting about 15 percent of your salary aside starting in your early to mid-20s should put you on a path to hit these savings targets. If there is a major market decline, try to take the opportunity to increase your investing while stocks are on sale, if possible. Buying while stocks are cheap helps increase your long-term returns.

If you want to have a more active or lavish lifestyle in retirement, you may want to exceed these targets, and strive for having 11 or 12 times your pre-retirement income saved by the time you reach age 65.

What to Do if You’re Behind

If you’re behind the 8-ball in your retirement savings, you’re not alone. The data say that most people are in the same boat.

But resist the temptation to try to make up the difference by taking on too much risk. Chasing get-rich-quick schemes or embracing speculative investments is not a reliable way to build wealth.

Instead, try the following:

Above all, don't procrastinate. If you are behind, take immediate action to increase your retirement savings. The earlier you start, the easier it will be to catch up. Even a one percentage point increase in the fraction of your income you put away can make a meaningful difference when you reach retirement age.

Get the Free 2021 Gold IRA Investor Kit Americans are Using to Protect their Retirement Savings...