Biden Tax Plan: What a Biden Presidency Might Mean For Your Portfolio

What Biden's Tax Plan Might Mean for Your Portfolio

Prior to the election, many writers and political analysts expected that Biden would likely win the White House. It was also 'expected' that the Democrats would remain in control of the House of Representatives, and that their power would be checked by continued Republican control of the Senate.

In that scenario, we could expect certain provisions of the Tax Cuts and Jobs Act – the tax cut bill that President Trump signed into law in late 2017 – to expire on schedule. But without the Senate, Biden and the House Democrats would likely be unable to pass much of their tax agenda.

The GOP made some gains in the House, picking up nearly all the seats that most pollsters considered ‘toss-ups.’ But Nancy Pelosi and the Democrats held on to their majority, and managed to take two run-off elections in Georgia that would put them (barely) in control of the Senate for the next two years.

That means that some significant tax increases could be within their reach. Let's take a close look at what we can expect from President Biden's tax plan.

Target Number One: The Tax Cuts and Jobs Act

Live by the party-line vote, die by the party-line votes. When the GOP passed the TCJA in 2017, they did so without a single Democratic vote in either house. When this year's Congress considers tax policy, Republicans can expect the TCJA to have no defenders on the Democratic side of the aisle. Further, Biden himself is on record promising to "eliminate the Trump tax cuts."

Furthermore, the Democrats have been promising to repeal the TCJA since it was passed just over three years ago.

On the other hand, key Biden aides have signaled that the President does not support a complete TCJA repeal. Yes, with a fully-Democratic Congress and with Biden in the Oval Office, we will probably see at least a partial rollback of the TCJA’s provisions, rather than a complete scrapping of the Act. The most likely components to be axed are those that favor corporations and very wealthy individuals.

Higher corporate taxes could throw a wet blanket over corporate earnings, and ultimately stock prices. This could also affect the ability of some companies to roll over or retire debt.

It won’t all happen in the first year of Biden’s presidency.  We may not see these changes until a year or two into Biden’s presidency. Incoming Treasury Secretary Janet Yellen has indicated that Biden intends to front-load stimulative spending to get the economy through the COVID crisis first. The tax increases would come later in the recovery, she said.

Additionally, several important provisions of the TCJA are set to expire at the end of 2025. But Secretary Yellen has indicated support for making at least some of those tax cuts permanent for those making less than $400,000 per year.

Nevertheless, President Biden's proposed changes, if enacted, amount to a tax increase of approximately $2.5 trillion over the next decade.

What @JoeBiden's Presidency means for your #taxes, #401k, IRA, or investment portfolio

Transportation Secretary nominee Pete Buttigieg has already floated the idea of a new gas tax, ostensibly to pay for highway projects. "The gas tax has not been increased since 1993 and it’s never been pegged to inflation,” he said in a Senate confirmation hearing. A spokesman later walked that idea back, but it indicates that some revenue-raising ideas that were not on the Democratic platform during the campaign are on the table now.

Senator Bernie Sanders has also proposed a tax on financial transactions – an idea that could find new life now that Democrats unexpectedly have control over both houses of Congress and the Presidency.

Below: Americans for Tax Reform President Grover Norquist claims the Biden tax plan will 'absolutely' drive business out of the U.S.

Related: Gold IRA Guide reveals how to secure your IRA or 401(k) with gold - without outrageous fees or taxes from the IRS >>

One important virtue of divided government is both sides prevent each other from enacting their dumbest ideas.

Government is no longer divided. So expect some imprudent spending, which may or may not be offset by tax increases.

First, we're not out of the COVID woods yet – and there's broad consensus on both sides that we need to throw more money at the problem. We'll likely see the December COVID stimulus go through at or close to $1,400 per adult. That, combined with the $600 per adult payment processed in December and early January would add up to $2,000 per adult.

But federal spending won't stop there. Look to Congress to add to the spending in a variety of ways:

In the long run, big deficits weigh heavily on bond prices. Bond buyers have to price in the effects of future inflation, and therefore push yields for themselves up to compensate by bidding prices down.

On the plus side, the economy loves stimulus. And Democrats are generally more favorable to passing large direct stimulus payments to American taxpayers. This could be a plus for stocks in the short run – though perhaps more effective in the threat than in the execution. As former British Prime Minister Margaret Thatcher pointed out, eventually you run out of other peoples’ money.

Related: Bitcoin IRA Guide - how to diversify your stock-heavy 401(k) with digital currencies like Bitcoin, Ethereum, and Litecoin 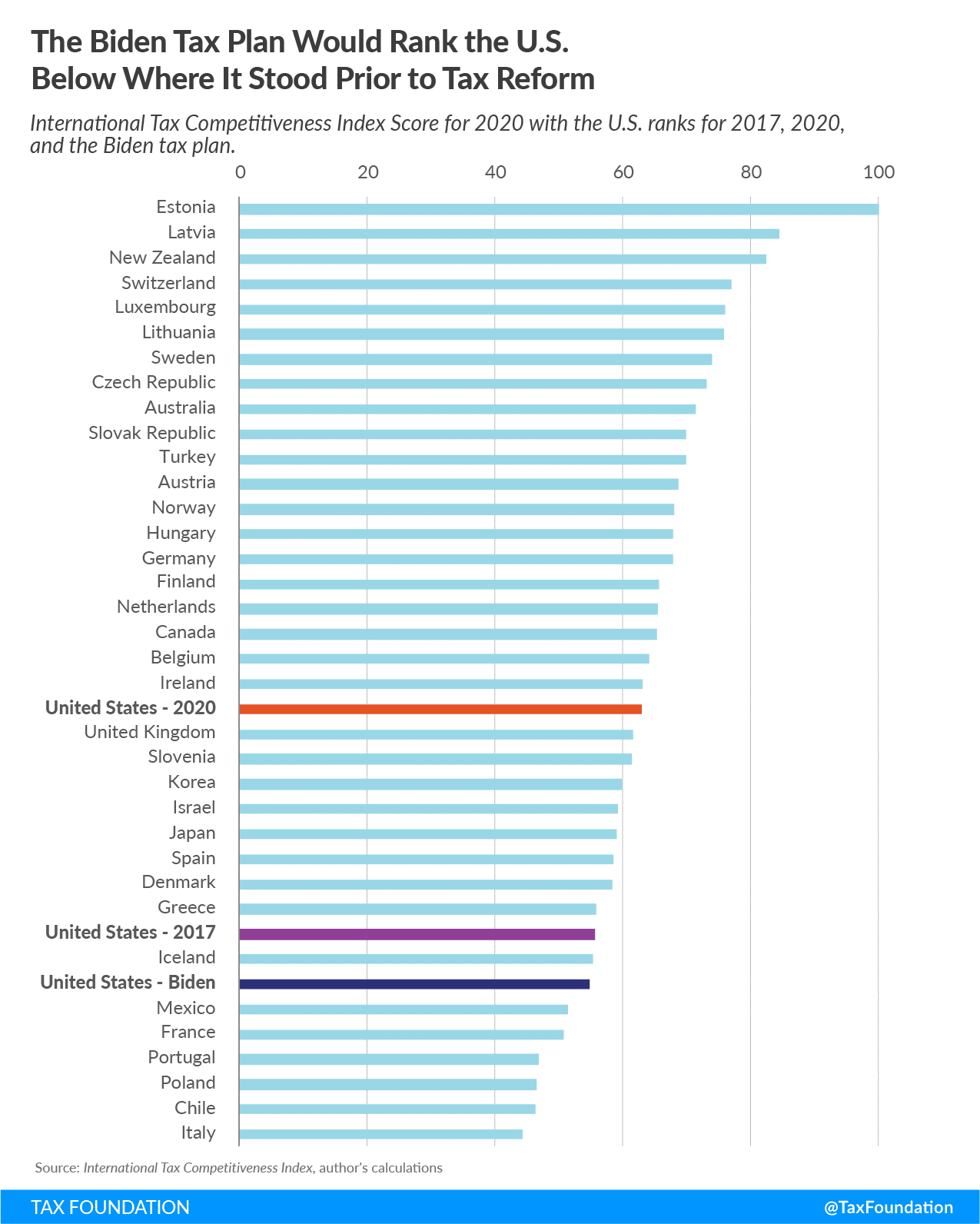 How does the U.S. rank internationally with the Biden Tax Plan? Image courtesy of TaxFoundation.Org

The Role of Gold in Your Portfolio

As usual, savvy investors are turning to gold and precious metals as a hedge against the coming market turmoil. Markets are already pricing in significant increases in government spending, deficits, and loose and inflationary monetary policy: Gold prices rose by 25%, and silver prices rose by 48% in 2020. Both are continuing to rise in the earliest days of 2021.

The government will have a much harder time tracking and taxing the growth and sale of physical gold than it does bank and Wall Street wirehouse transactions, which are electronically logged and available to government agencies.

Within IRAs, gold has another important advantage: IRA owners have the option to take distributions in gold rather than cash.

Related: Gold Vs. Silver - Which should you own in your portfolio?

Biden Tax Plan: What to Do Now

Now's the time to 'lock in' today's lower tax rates, and protect your portfolio from future tax increases and market volatility as stocks inevitably, if belatedly, adjust to the economic realities of higher taxes, higher inflation, higher interest rates, and reduced economic growth.

Some actions to consider: