Once you leave the work force, you may have a lot of flexibility about choosing where you want to live. Of course, being near friends and loved ones is an important consideration. But taxes are another vital factor. After all, a few thousand dollars saved in taxes each year can go a long way towards buying plane and bus tickets to visit loved ones or help them come visit you.

Some states’ tax regimes are much more friendly towards retirees than others. States differ widely in how they tax income – especially when that income comes from common retirement sources, such as pensions, military retirement pay, and Social Security. Some states also tend to have higher property taxes than others. But some states provide significant property tax exemptions for senior citizens, as well, which would mitigate otherwise high property taxes.

If property taxes are your most important issue, you might consider these states, which Tax-Rates.org rates as having the lowest average property taxes as a percentage of home value:

Sales taxes are another important concern. But retirees should look to see if their intended state exempts groceries, clothing, and similar necessities from their sales taxes. You should also look carefully at the local sales tax rate, if any, to get a fuller picture of the overall tax environment in any particular county.

In some cases, a high sales tax with few exemptions can be more significant than a low income tax rate – especially if you expect to spend most of your retirement income on goods and services subject to the sales tax.

Some states also tax estates and inheritances, especially where there’s a lot of money being passed on to heirs.

If you are in retirement or approaching retirement and you want to maximize your income after taxes, this article is for you. This piece will also be useful if you want to know what states tend to have low-tax environments overall. We are not assessing overall costs of living, though some tax-friendly states, such as Alaska, do have very high costs of living.

Related: Retirement Savings By Age - Are You On Track?

Let’s address the most significant item first: The first places to consider as your retirement home are likely the states that do not impose an income tax at all. Currently there are seven states with no tax on income: Alaska, Florida, Nevada, South Dakota, Tennessee, Texas, Washington, and Wyoming.

New Hampshire does have an income tax. But it does not tax earned wage income. So if you’re planning on working well into retirement, and much of your income will be wage income, New Hampshire might still be a low-tax choice – especially if your retirement income is largely from non-taxable sources like Roth IRAs, Roth 401(k) accounts, municipal bonds, and life insurance dividends and loans against your cash value.

New Hampshire’s dividend and interest income tax is scheduled to sunset in 2023, at which time, barring any changes to the law, New Hampshire residents should be totally income tax-free.

Until recently, Tennessee taxed dividend and interest income, but that part of the law was recently repealed.

Illinois is widely considered a high-tax environment. But it exempts most traditional pension income from state taxes:

Pennsylvania also exempts many common sources of retirement income from state income taxes, including all Social Security income and distributions from retirement accounts for those age 60 and older.

So even though these states are not among the states that don’t have an income tax, they still may be worthy of consideration as retirement destinations for those over age 59½.

Related: When Should You Start Taking Social Security?

Alaska is the only state in the Union that actually pays you to live there. Each year, each Alaska resident gets a check from the Alaska Permanent Fund, representing their per capita share of revenues from Alaska’s vast oil reserves. The cost of living in Alaska is high, but the lack of an income tax and the annual Permanent Fund dividend combine to give Alaska residents the overall lowest tax burden in the country.

There is a beer tax of $1.07 per gallon, however – the second highest such tax in the country. So take that into careful consideration before you move to the 49th state.  However, there is no state sales tax. Local governments can add a sales tax (the highest is 7.5%, but the average sales tax in Alaska counties is a very manageable 1.7%.

Florida has long been an extraordinarily popular destination for retirees – especially those seeking refuge from high-tax New York and New England states and their severe winter weather. Many retirees from these states make their domiciles in Florida and live there at least half the year, and source their income to Florida in order to minimize their state tax burdens.

As mentioned, Florida has no state income tax whatsoever.

Property taxes are somewhat below the national average. In addition, Florida allows a significant homestead exemption to those age 65 and older that can help reduce the property tax burden further. Florida also has property tax benefits for military and veterans.

There is a statewide sales tax of 6% on most transactions, and Florida counties can and do add piggyback sales taxes, so your sales tax could total as much as 7.5%. However, local sales taxes are capped at transactions of $5,000.

There are no estate or inheritance taxes in Florida. So it’s a good place for those who want to maximize the total legacy they leave for their heirs. 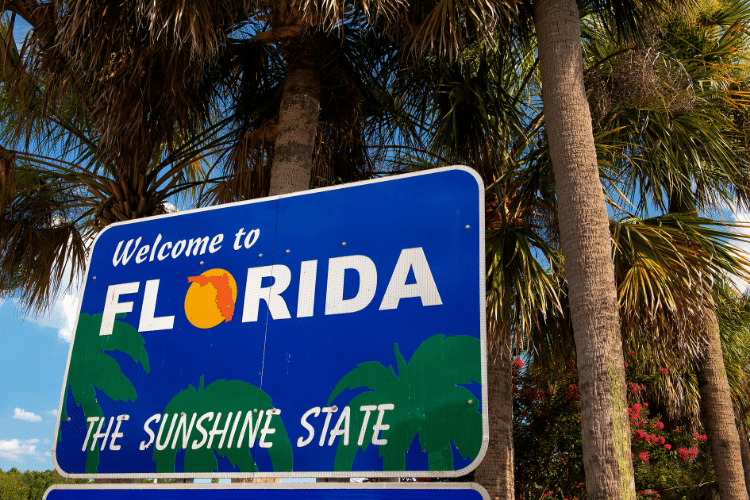 Florida is a popular low-tax destination for retirees

Wyoming also doesn’t have a state income tax. And it’s a relatively affordable place to live – with the notable exception of Jackson Hole, which has become one of the most expensive real estate markets in the United States in recent years.

The sales tax burden is low in Wyoming as well: The average sales tax rate is 5.39%, which is well below the national average. Groceries and prescription drugs are exempt from sales tax in Wyoming, while clothing and prepared food are taxed at a reduced rate of 4%.  Utilities, medical devices and fuel are also exempt from the Wyoming sales tax.

Nevada combines the advantages of no state income tax with a low property tax burden, which make the state a compelling option for those looking for a low-tax environment to retire to.

However, unlike Florida, there are no homestead exemptions or equivalent benefits for retirees to reduce that property tax burden even further.

Again, there are no estate or inheritance taxes in Nevada.

There is, however, a significant sales tax issue: The state imposes a 6.85% sales tax, and counties can plus that up by as much as 1.53%. On average, you can expect to pay about 8.23% in sales taxes, which is well above the national average. Groceries (unprepared foods) and farm equipment is exempt.

If you’re looking for a low-tax coastal state with no sales tax to retire to, and you’re willing to accept a small income tax, Delaware may be your destination. It’s not one of the states that has a zero income tax, but there are no state or local sales taxes to worry about. So if you’re planning on consuming much of your retirement income on goods and services that might be otherwise subject to a sales tax in other states, the top 6.6% state income tax might be a reasonable tradeoff.

Residents over age 60 can exclude up to $12,500 of pension and other retirement income, as well as all Social Security income. So the net tax burden for retirees is significantly lower than that percentage – especially at lower income amounts.

Furthermore, property taxes in Delaware are among the lowest in the nation. Once you live in the state for ten years and you are a senior citizen, you may qualify for a school property tax credit of $400 under current law.

Delaware has no estate or inheritance taxes. 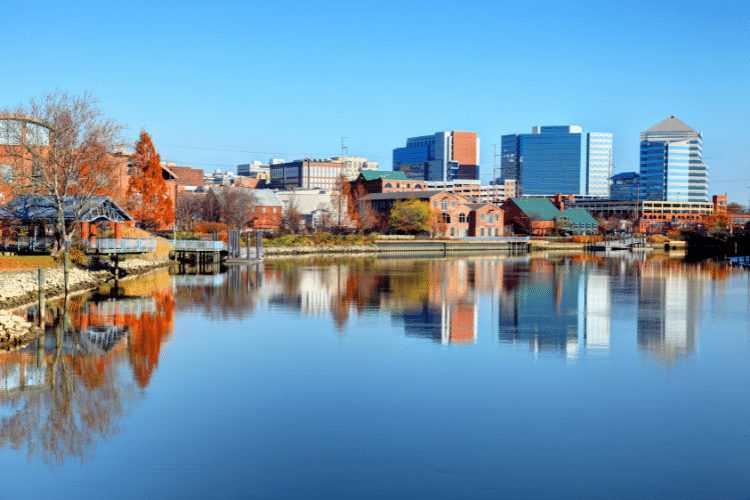 If you want to live free or die in New Hampshire, you can do so without paying an arm and a leg in taxes. The Granite State has no state income tax on retirement account distributions, earned wage income or Social Security income, and will be repealing its income tax on interest and dividends in 2023. Until then, if you’re age 65 or older, you may qualify for an additional $1200 exemption on this income.

The downside to living in New Hampshire: High property taxes. The average New Hampshire homeowner can expect to pay more than $5,700 per year, or more than twice the U.S. average.

There is a property tax rebate available to New Hampshire residents with modest incomes (under $20,000 for singles, and under $40,000 for couples).

But if you plan to live in a modest house or have a modest income that qualifies you for the rebate program, you can keep that tax issue under control. If you can do that, then the rest of the New Hampshire tax regimen is possibly the friendliest for retirees in New England.

New Hampshire has no estate taxes or inheritance taxes.

It also has a low cost of living in much of the state (Nashville and Franklin and the surrounding areas are getting pretty pricey, though!)

The big drawback to living in Tennessee is the high state sales tax rate of 7%. Counties and municipalities can and do add additional sales tax on top of that, resulting in an overall average sales tax rate of about 9.55%. However, medical supplies, groceries and certain other food items are generally exempt. So are water, gas, and electricity, furniture, jewelry, motor vehicles, and marine vessels.

The following states provide a credit or exemption for a significant amount of retirement income. Depending on your situation, these states may be attractive choices for protecting your retirement income from taxes while still remaining close to family and friends, recreational opportunities, and health care:

On the flip side, there are certain states that do not treat retirees very well when it comes to their tax regimens:

The Golden State combines a high cost of living with a top marginal income tax rate of 13.3%. Yes, that’s for people with incomes in excess of $1 million per year ($1,181,484 for married filers of joint returns). But the income tax on middle class Californians is pretty ugly, too, compared to the rest of the country.

Minnesota has a high income tax burden of 9.85% on incomes over $164,400 ($273,470 for married filers), with no significant breaks on common sources of retirement income.

And it’s not like the weather makes up for it, most of the year.