American Gold Eagle coins are the most widely-circulated and recognized gold bullion coins in the world. Additionally, the metal content of each authentic American Gold Eagle – as well as their silver, platinum and palladium counterpoints – is guaranteed by the full faith and credit of the United States.

American Gold Eagles are also widely-regarded as among the most beautiful coins – especially the higher-grade burnished and proof varieties.

The combination of the full faith and credit guarantee and the sheer beauty of the American Eagle’s design and minting makes them among the most liquid gold coins in the world. Their quality and consistent purity is almost universally recognized by both gold dealers and collectors.

Bearers of American Gold Eagle coins will find a ready market in almost any large city in the world. They can be bought and sold as quickly and easily as any other precious metal commodity and for a consistent price tied closely to the spot price of gold on international markets.

As such, they are in high demand both among coin collectors and investors all over the world.

Thanks to this demand, American Gold Eagle coins typically trade at a premium of between 1 and 2 percent compared to other similar coins from around the world.

The minting of American gold coins as legal tender goes back almost to the founding of the Republic. The United States first minted our own sovereign coins as legal tender under the Coinage Act of 1792. These gold coins were in common use and held their value well until they were removed from circulation by the Roosevelt Administration in 1933, when the government forbid the private ownership of gold bullion.

In 1985, Congress passed the American Gold Bullion Act, authorizing the U.S. Mint to produce American Eagle Gold Coins. But by law, these coins may only be minted from gold mined from within the United States. The first coins produced under this act were made available for sale in 1986.

American Eagles are made from “crown gold,” a 22-karat alloy first developed by the government of King Henry VIIIth of England in 1526. This alloy consists of 91.67% gold, 3% silver, and the remainder in copper. The addition of other metals provide more durability and scratch resistance than pure gold – a vital consideration for any coin intended for use as an everyday currency.

More recent coins have increased their gold content, since modern coins are not commonly used in everyday transactions. However, the American Gold Eagle is one of a few coins still being produced that retained the traditional crown gold alloy formula – the others being the British Sovereign and the South African Krugerrand. 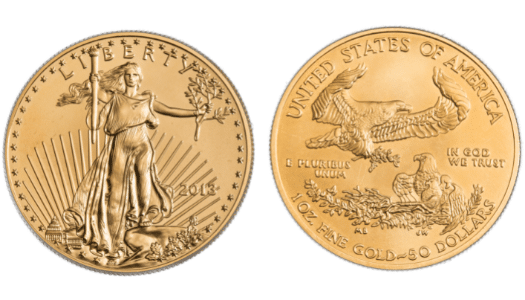 The face values on American Gold Eagle coins are strictly nominal. The value of these coins has nothing to do with the face value markings. Instead, their value is primarily derived from the much greater value of their precious metal content, as determined by the “spot price” of gold on the global markets at any particular time.

American Eagles are available as bullion coins – manufactured for investors strictly as a consistent store of gold – and as proofs. Proofs are specially-minted coins made primarily for collectors.

Burnished coins have a Mint Mark, while Gold Eagle proofs do not.

The proofs and burnished coins trade at a significant premium to bullion coins, but are not suitable for investors whose primary focus is the precious metal content of the coin.

Investors and collectors alike should be familiar with the Sheldon Coin Grading Scale, also called the Sheldon Numismatic Scale. Developed in 1949 and reformed in the 1970s, this is a standard set of criteria adapted by the American Numismatic Association. Appraisers and coin dealers use it to appraise the value of coins, including the American Gold Eagle.

Specifically, the Sheldon Scale consists of the following grades:

Grades of 60 or above reflect various grades of uncirculated coins:

American Gold Eagle coins enjoy special status when it comes to IRAs. They are the only gold coin exempt from the generally-applicable 0.999% purity requirement that applies to gold IRA holdings. Other crown gold coins such as the South African Krugerrand, though made of the same alloy, are not authorized for IRA accounts in the United States.

Related: What Precious Metals are Allowed in Your IRA?

However, most experts recommend sticking with the bullion: Proof coins trade at too high a premium, which works against you when it comes to IRA accounts. Also, since investors cannot take personal possession of coins, bars or rounds held within IRA accounts, there is no aesthetic upside to buying these coins for an IRA. You won’t get to enjoy their beauty.

For most investors, it’s a better idea to buy bullion for their IRA accounts, and reserve their proof holdings for non-retirement accounts, where these restrictions don’t apply. For more information about how to buy American Eagles with your 401(k), request your free gold IRA investor guide here.

Learn how to add American Gold Eagle coins to your investment portfolio or retirement account (tax-free)...