In the early 80s, the United States had amassed a massive stockpile of silver far greater than the country's strategic needs. Attempts to sell the stockpile were unsuccessful and threatened to cause a disruptive silver glut in world markets.

Rather than sell massive quantities of silver at fire-sale prices, The Reagan Administration and some Congressional leaders pushed to create a silver coin program that would get the highest possible return on silver sales for the U.S. taxpayer.

Congress first authorized the minting of the Silver Eagle under the Liberty Coin Act of 1985, and the first coins were minted and distributed in late 1986.

Congress also wanted a series of gold, silver, platinum, and palladium coins to serve as a viable investment alternative to coins minted in other countries.

By 2002, the production of Silver Eagles had depleted the original silver stockpile. President George W. Bush signed a new bill authorizing the purchase of new silver on the open market to support the continuation of the Silver Eagle program.

Because each American Silver Eagle coin carries the official backing and guarantee of the United States Government, these coins tend to trade at a premium compared to other silver coins minted overseas. 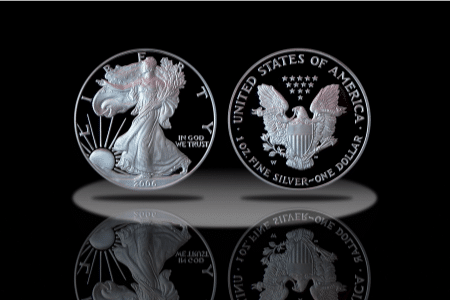 The American Silver Eagle coin’s design is based on Adolf Weinman’s “Walking Liberty” half-dollar coin design. The Walking Liberty half-dollar ran from 1916 to 1947. Long renowned for being one of the most beautiful coin engravings ever designed, Weinman’s vision was updated with new production techniques and adopted for the Silver Eagle.

The coin's reverse side shows a John Mercanti design of an eagle carrying a shield and bearing an olive branch in its right talon and a group of arrows in the left. The olive branch is a symbol of peace, while the shield and arrows represent defensive and offensive war, respectively.

Since 2021, the reverse shows an eagle coming in for a landing, carrying an oak branch as if to add it to a nest. To give the new coins an added level of security, they have also been updated with enhanced security features, including a reeded edge variation.

The newer coins have a number of security features, as well, to help prevent shaving, counterfeiting, and other forms of fraud.

Unlike the American Gold Eagle coins, which are minted in 1-ounce, ½-ounce, 1/4th-ounce, and 1/10th ounce sizes, the Silver Eagle only comes in one size: 1-ounce.

American Silver Eagles weigh 1.000 troy ounces (31.103 grams) and have a diameter of 40.60 mm. Edges are "reeded," which makes all but the most sophisticated attempts at "shaving" metal from the coins obvious to dealers and knowledgeable collectors.

Also, like the Gold Eagle Coins, the Silver Eagle comes with a nominal face value engraved on the coin. But the face value is meaningless: The real value of the coin comes from the metal content itself.

Prices are based on the market price of silver, plus a small premium to cover minting and distribution costs.

Related: Investing in Silver Coins and Rounds - What You Need to Know

The Silver Eagle comes in bullion and proof form. The term "bullion" refers to a precious metal minted or struck solely for investment and financial reasons as a standard store of value. Bullion coins are not intended for day-to-day use as currency. This makes it possible to mint bullion coins of very high purity.

Proof coins are specially minted using advanced production techniques designed to enhance their desirability and value for collectors. The Silver Eagle proofs are minted using special, high-grade dies to improve contrast and feature sharpness. In addition, the backgrounds of proof coins are mirrored, with other elements featuring a "frosted" appearance.

The global financial crisis of 2008 led to a run on silver, so no proof coins were minted for the year 2009. The U.S. Mint resumed minting proof Silver Eagles at West Point from 2010 through the present writing in 2021.

The U.S. Mint also produces an "uncirculated" or "burnished" version of the coin, marketed at coin collectors – first at West Point from 2006 through 2008 and then from 2011. Like the proof versions, these coins bear the "W" mintmark, indicating West Point.

American Silver Eagle coins are authorized for use in IRAs and other retirement accounts. However, investors interested in holding these coins within retirement accounts should take careful note of the various laws concerning IRAs. A mistake could cause the IRS to revoke your IRA’s tax-advantaged status, resulting in significant tax penalties and fines.

Investors may not take personal, direct possession of American Silver Eagles or other coins, bars, and bullion within IRA accounts. Instead, all precious metals in retirement accounts must be physically held by an IRS-authorized custodian – often a third-party vault service.

What Kind of American Silver Eagle Coin is Best for IRA Accounts?

Generally, U.S. law prohibits owning proof coins within IRAs. By law, all IRA precious metals must be bullion, though Congress made an exception for the American Eagle series of coins. That said, most experts recommend that precious metal IRAs hold only bullion. This is because proof coins, like other collector’s coins and numismatics, trade at a premium, which would drive down IRA returns.

Instead, hold bullion in your retirement accounts, and reserve the higher-grade proofs, burnished coins, and other collectors' items for your personally-owned collection.

Where to Buy American Silver Eagles

Though the U.S. Mint exclusively manufactures American Silver Eagles, you cannot buy coins directly from them. Instead, they work through authorized coin dealers throughout the United States.

You can also buy American Silver Eagles via private sellers on the secondary market. However, investors should take care to avoid counterfeits and other scams, such as sellers who tell you that you are buying proof coins (or coins meeting a specific quality grading) while delivering a bullion rather than a proof coin.