First authorized in 2005 under Public Law 109-145 (The Presidential $1 Coin Act), the striking American Gold Buffalo Coin was the first 24-karat bullion coin ever produced by the United States Mint.

With a guaranteed minimum purity level of 0.9999 ("four nines fine"), the American Gold Buffalo coin features a purity level as high as any mass-minted sovereign coin in existence. As a U.S. Mint product, the Gold Buffalo's weight and fineness are backed by the guarantee of the United States Treasury. This helps the coin trade at a premium to other coins with the same weight in gold but a less certain provenance.

Highly prized by investors and collectors for its purity and beauty, the Gold Buffalo is recognized by coin dealers worldwide. It's highly liquid: It's easy to convert the Gold Buffalo to cash with reputable dealers in any large city in the world.

The Gold Buffalo coin came to fruition as a response to investor demand. The Canadian Gold Maple Leaf, introduced in 1979, also has a 0.9999 purity level, was a roaring success among both investors and collectors.

The U.S. Gold Eagle coin, in contrast, is 22-karat, not 24-karat. That is, it has a purity level of 0.9167.  The Gold Eagle is minted in an alloy of gold, silver, and copper called "crown gold" – a compound developed under King Henry VIII of England because it holds up much better to wear and tear than pure gold.

In the modern world, however, investors and collectors exhibited a clear preference for the 24-karat Maple Leaf over lower-purity coins like the American Gold Eagle.

In 2005, Congress authorized a new 24-karat coin, minted by law entirely from newly-mined gold from within the United States, in order to compete with the Canadian Maple Leaf. The U.S. mint does not use re-melted gold to make American Gold Buffalos coins.

The first American Gold Buffalos were minted in June 2006.

The American Gold Buffalo design is a reprise of the earlier Buffalo Nickel, also called the “Indian Head nickel,” a popular and widely-circulated coin that ran from 1913 through 1938.

The design is a sculpture by James Earle Fraser (1874-1953). The obverse of the coin features a striking engraved portrait of a Native American. According to Fraser, the engraving is a composite of three different Native American chiefs — Iron Tail, Big Tree, and Two Moons — who allowed Fraser to sketch their portraits.

The obverse also bears the word “LIBERTY,” the year of mintage, and a capital letter “F,” commemorating the artist himself.

The reverse side of the coin features an American bison (commonly referred to as a "buffalo"), and the motto "E PLURIBUS UNUM," as well as the words "UNITED STATES OF AMERICA."

Related: Safeguard Your IRA or 401(k) with this Little-Known IRA "Loophole" 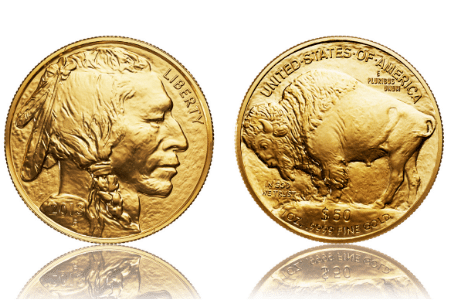 The different metal content in the American Gold Buffalo vs. the Gold Eagle is evident in its appearance. The American Eagle has a slightly reddish hue compared to the yellower Buffalo. This reflects the 5.33% copper content of the Gold Eagle coin.

The Gold Eagle is thinner than the Buffalo coin, as well, because of the engraving. The Buffalo coin is minted with a much deeper relief than the Gold Eagle, which gives the coin a more textured look and feel with greater contrast.

The value of both coins is driven overwhelmingly by the spot price of gold on the global markets (plus, in practice, a small markup for shipping and handling, market-making, etc.). However, the Gold Eagle is also slightly affected by changes in the market price for silver and copper, since the Gold Eagle contains both of those metals in its crown gold alloy. The Gold Buffalo coin does not.

Because 24-karat gold is a much softer metal than the crown gold alloy in the Gold Eagle and similar coins from around the world, it is much more susceptible to scuffing and wear and tear. The Gold Buffalo coin is meant to be a store of value and collectors’ item, not for use as currency. It’s easy for careless handlers to accidentally scratch up a Gold Buffalo or Gold Maple Leaf coin and potentially cause it to lose some value.

For this reason, veteran collectors recommend storing and transporting all Gold Buffalo coins in capsules rather than “flip-open” containers.

In 2008, the U.S. Mint did a brief run of American Gold Eagle fractional sizes in half-ounce, quarter-ounce, and 1/10th-ounce versions. However, these runs did not sell well, and the fractionals were discontinued.

Today, these smaller versions have a rarity value that is prized among numismatic collectors, so you may see these discontinued coins trading at a premium.

The U.S. Mint briefly suspended the production of Gold Buffalo coins in 2008, as the subprime mortgage crisis caused investors to flee to the safety and soundness of gold.

The U.S. Mint was unable to keep up with soaring demand for the coins. After a brief hiatus, production resumed, and the Mint distributed Gold Buffalo coins to designated dealers under an allocation program.

The American Gold Buffalo is minted in both bullion and proof versions. The term "proof" refers to special runs intended for collectors rather than investors. Proof coins are made with a special minting process. Each proof coin is struck several times using special dies. This gives the raised images a beautiful, slightly frosted appearance that creates a 'floating' effect above the field.

Each newly-purchased Gold Buffalo proof comes with a Certificate of Authenticity from the U.S. Mint.

All American Buffalos are struck at the U.S. Mint at West Point. There is no mint mark on the bullion version of the coin, but the proof version bears a “W” mint mark to denote the West Point facility.

Related: What is a Gold IRA? Ultimate Investor Guide

The U.S. Mint sells proof coins directly to the public. However, they do not sell bullion to the general public. To buy new bullion Gold Buffalo coins, you must purchase them through one of the U.S. Mint’s authorized purchasers. You can also purchase them in the aftermarket via a private seller or coin dealer. To learn how to purchase American Gold Buffalo coins with your 401(k), request your free investor kit here.