First introduced in 1989 as a 1 troy ounce gold coin named for the renowned Vienna Philharmonic Orchestra, the official Austrian state gold coin is made to a 999.9 fineness level - a 24 karat, ‘pure gold’ product, making it acceptable for IRA accounts in the U.S.

The initial runs of the Vienna Gold Philharmonic 1-ounce coins had a nominal face value of 2000 Austrian gold schillings.

At present, the Philharmonic is the only European bullion coin minted with a face value in euros. Nevertheless, thanks to the quality and consistency of its manufacture, the coin is universally recognized by collectors and investors alike for the value of its metal. 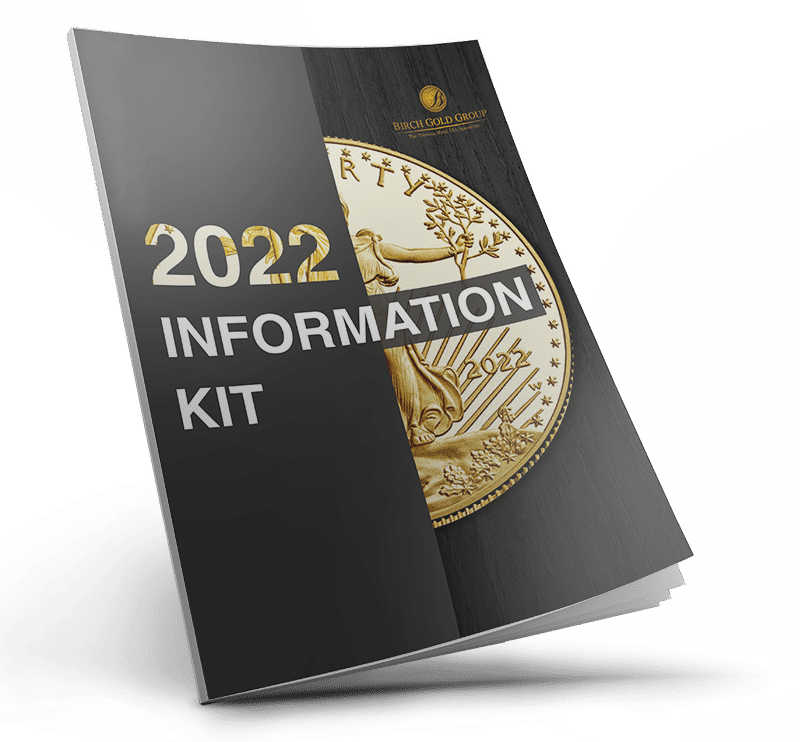 Discover how to supercharge your IRA or investment portfolio with Austrian Gold Philharmonic coins...

The Austrian Mint traces its heritage back to 1192, when King Richard I of England (Richard the Lionheart), was captured near Vienna  by the forces of Duke Leopold of Austria while trying to return from the Crusades. Leopold believed Richard had arranged the murder of his kinsman, Conrad of Montferrat. Richard had also offended Leopold during the Crusades when he cast down Leopold’s banner from the walls of Acre. Leopold transferred his famous prisoner to the Holy Roman Emperor Henry VI, who, as it happened, needed cash to raise an army of his own.

Henry VI ransomed Richard back to England and France for the payment of 100,000 pounds of silver. Duke Leopold created what became the Austrian Mint to strike and distribute coins made from Richard the Lionheart’s ransom.

In 1998, a change in Austrian law allowed for the direct ownership of pure gold coins as an investment. Austrian Mint officials saw the opportunity to create a national coin that would symbolize the nation of Austria.

Officials discussed a number of possible themes for the new coin and decided on the Philharmonic as emblematic of Austria’s deep and rich musical heritage.

Related: How Much Does a Gold Bar Weigh?

The original design by Thomas Pesendorfer, the Austrian Mint’s chief engraver, features the pipe organ in the Golden Hall of the Musikverein, the home auditorium of the Vienna Philharmonic Orchestra. The German words "REPUBLIK ÖSTERREICH" (Republic of Austria) are engraved on to the obverse side, along with the coin’s composition and weight are also minted on the obverse.

On the reverse side, the coin features the words “WIENER PHILHARMONIKER” along with a display of musical instruments: Violins, a cello, a harp, a bassoon and a Vienna horn.

A gold coin should be obvious by the color. However, the Austrian Mint inscribes the word “SILBER” or “PLATIN” on coins to identify silver and platinum coins, respectively.

The Vienna Gold Philharmonic coin is minted with a minimum fineness of 99.99%, or “four nines fine,” making it among the purest gold coins in circulation today. That qualifies it as a 24-karat product.

The advantage of owning coins of such high purity and fineness is that the coin is worth more than other less fine coins of equal total weight. In the United States, their high level of purity also qualifies them for IRAs and other self-directed retirement accounts.

The disadvantage of this level of fineness for gold coins is that pure gold is a very soft metal, and therefore prone to scuffing and scratching. Many gold coins, including American Eagles and South African Krugerrands, are made of an alloy of gold, silver, and copper to make them much more resistant to wear and tear. However, except in the case of American Gold Eagle coins, which enjoy a statutory exception, these coins are not allowed to be held within IRA accounts.

If you buy or own Austrian Gold Philharmonic coins, you should be very careful to store them in protective cases, blister packs, or clamshells, and protect them from contact with other metals, which could cause scuffing and scratching, which could erode the value of your coins.

The platinum version of the Philharmonic is minted with a fineness of 999.5% - again making it one of the purest coins of its type on the market.

Related: What Precious Metals are Eligible for Your 401(k) or IRA?

Discover how to supercharge your IRA or investment portfolio with Austrian Gold Philharmonic coins...

The Austrian Philharmonic coin comes in five different denominations, the 1 troy ounce (the largest in common circulation and the most popular and widely-held), the 1/2-ounce, the 1/4 -ounce, the 1/10th-ounce, and the smallest, the 1/25th ounce coin, which became available in 2014.

The Austrian Mint struck a new 20-ounce version of the Gold Philharmonic in 2009, in observance of the coin’s 20thanniversary. This coin has a diameter of 74mm (3 inches) and a thickness of 8.3mm (0.3 inches). The Mint issued a total of 6,027 of these 20-ounce coins, evenly distributed between the European, U.S., and Japanese markets.

Discover how to supercharge your IRA or investment portfolio with Austrian gold, silver, or platinum Philharmonic coins...

In observance of the 15th anniversary of the Vienna Philharmonic bullion coin in 2004, the Austrian Mint struck a new 1000-ounce version of the coin, containing 31.13 kg (68.57 pounds) of gold.

This coin has a diameter of 15 inches and a thickness of 2 cm. The face value printed on the coin is 100,000 euros, though its intrinsic value based on its gold content is obviously much greater than that. The Austrian Mint manufactured fifteen “Big Phil” coins, most of which were sold to private investors and institutions whose names have not been publicly disclosed. 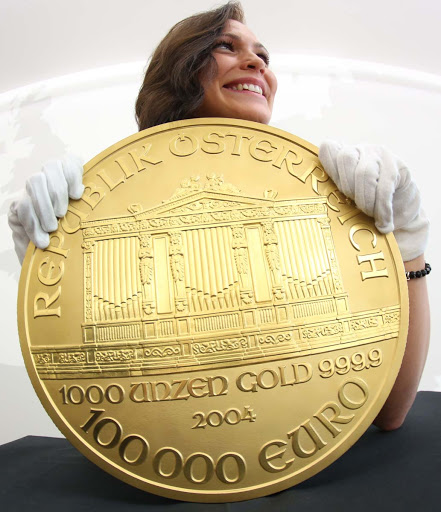 The term bullion indicates coins and other products struck, cast, or minted as a standard store of a specific and consistent metal content. Beauty, rarity, and potential value to collectors are a secondary concern.

However, the Austrian Mint has manufactured a limited number (5,000 each) of proof 1-oz and ¼-oz coins. Proofs which are minted to a higher quality compared to ordinary bullion coins, are designed to appeal more to collectors.

Proof coins are made with special dies and usually struck twice to achieve a greater level of detail. The rounds are polished to a lustrous sheen. All of this enhances the beauty of each individual coin, though it does not affect the metal content of the coin.

However, proof coins normally sell at a premium to their regular bullion counterparts, thanks to collectors and numismatists who are willing to pay extra for them.

Those primarily interested in Vienna Philharmonic coins as investments, however, should normally focus on the metal content of these coins, and prefer ordinary bullion to the proof versions.

Related: How to Diversify Your 401(k) or IRA with Physical Precious Metals (Free Guide)

The total number of Gold Philharmonic coins varies each year according to the Austrian Mint’s assessment of demand. But they do keep up a substantial supply of between 100,000 and 200,000 coins each year.

As a result, the supply of Gold Philharmonic coins is usually fairly liquid. The coins can therefore usually be purchased at a very narrow premium over spot price, which is good for investors who are interested in diversifying their investment portfolios with precious metals but who don’t want to take on an extraordinary amount of speculation risk. It is also good for those who choose to invest using gold IRAs, because it does little good to purchase gold coins at a premium for these accounts.

Austrian Philharmonic coins of all metal types are highly liquid. That is, they are popular and widely held. Most reputable gold brokers can readily fill orders at close to market prices for all the 1-oz and below denominations.

The Austrian Mint does not ship directly to retail buyers in the U.S. or outside of Europe. But if you are in Vienna or plan to be in Vienna, you can place an order directly for in-person pickup at the Mint.

If you’re buying from the Mint or new from an authorized dealer, the coins normally come in a protective plastic flip case, or in a tube for quantities of ten or more.

Note: Orders from the Austrian Mint do not come with a right of return. This is because the market value of the underlying metal fluctuates from day to day. However, the market for these coins is so liquid that you should have little trouble selling your coin(s) for very close to market prices, minus shipping and handling costs.

To learn how to add Austrian Gold Philharmonic coins (and other physical gold bars and coins) to your 401(k) or IRA, request your free gold IRA investor kit from Birch Gold Group below. 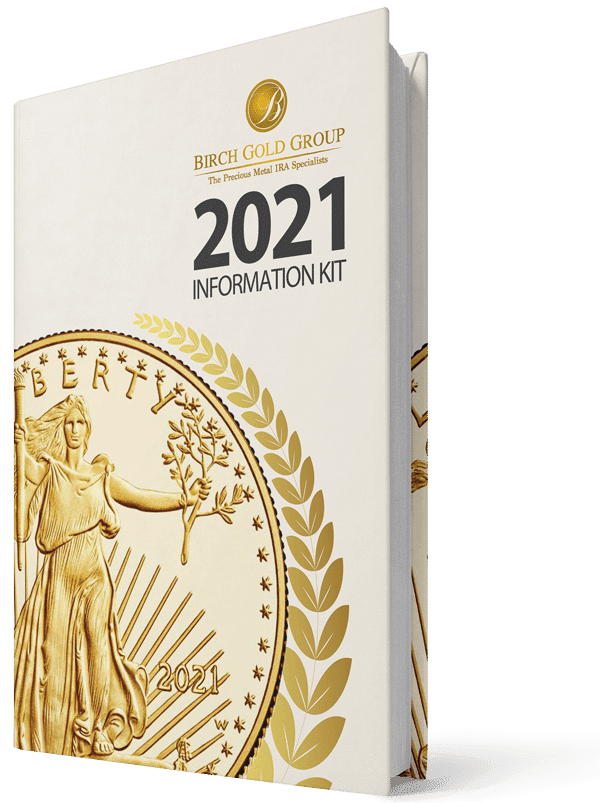 Gold IRA Guide: How to Add Gold and Silver to Your Retirement

Gold IRA Guide: How to Add Gold and Silver to Your Retirement