Introduced in 1979 to compete with the South African Krugerrand and the Austrian 100 Corona, the Canadian Gold Maple Leaf (GML) was the first national coin minted strictly for investment purposes.

They were initially produced with a purity of .999, but production quality improved, and the coins have been minted with a purity of .9999 ("four nines fine") since 1982. Additionally, there have been several runs that have attained a purity of five nines (.99999). These coins are among the purest gold coins ever manufactured and are in high demand by investors and collectors worldwide. 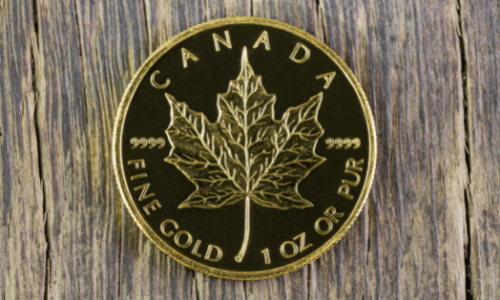 The Canadian GML coin is legal tender in Canada. They are minted with a face value of 50 Canadian dollars. However, purchasers should note that the face values on precious metal coins are notional only: Their real value comes almost entirely from the market price of the precious metal they contain.

The standard Gold Maple Leaf is minted with a weight of 1 troy ounce, or 31.10 grams. The Royal Canadian mint also manufactures Gold Maple Leaf coins in the following sizes:

All versions of the Canadian Gold Maple Leaf coin feature an engraved maple leaf on the reverse. The obverse side has been minted with three different engravings of Queen Elizabeth II:

There have been several special editions of the coin over the years, including:

The Royal Mint of Canada has been a leader among national mints regarding adopting security features and anti-counterfeiting measures for their high-value coins. Every die used in the production of Canadian Gold and Silver Maple Leaf coins is laser micro-engraved with an anti-counterfeiting security mark: a textured maple leaf. The Royal Mint of Canada uses digital non-destructive activation (DNA) technology to encrypt the images on their coins with a string of codes. These codes are then stored in a secured database controlled by the RMC.

In 2013, the Royal Canadian Mint added a micro-laser engraving of a maple leaf was added to the reverse side of the coin. There’s also a micro-engraving of the year of issue, visible only under a microscope.

In 2015, the RCM added radial lines to each coin’s background on both sides. These radial lines are precision-etched to a tolerance within microns. The precision line width and pitch is extremely difficult for even the most sophisticated counterfeiters to match, and lends each coin a distinctive look that is readily apparent to experienced dealers.

The authenticity of Canadian Gold Maple Leaf coins can be verified using Bullion DNA, a tool that takes a high-resolution image of the coin inserted below its lens. The Bullion DNA tool scans the encrypted codes embedded in the coin and matches them against the RMC’s secured database.

In 2020, the Royal Canadian Mint issued a new limited edition 10kg Gold Maple Leaf coin minted in .99999 pure gold. This five-nines coin features radial lines filling both the reverse and obverse faces. The Royal Canadian Mint has committed to making available not more than ten of these coins, preserving their value for collectors.

Pricing will be based on the global spot price for gold at the time of purchase, plus a premium for “manufacturing and a very low mintage.”

In 2007, the Royal Canadian Mint facility in Ottawa manufactured a series of six coins made from 220 pounds of pure gold (3,215 troy ounces) each. Each coin has a face value of $1 million, though the actual market value of the gold at this writing in early July 2021 is US$5.816 million.

At the time, these coins were the largest gold coins ever minted – a record the Canadian Gold Maple Leaf held up to 2011, when the Perth Mint issued a 1 ton, 31-inch diameter Australian Gold Nugget coin.

One of the six Big Maple Leaf coins in existence was stolen in 2017 from the coin cabinet in Bode Museum, Germany, where it was on display. The coin belonged to Boris Fuchsmann, a private collector. The coin was never found. Police believe that it was melted down.

With a minimum purity level of .9999, the GML coin meets the criteria for inclusion in IRA accounts in the United States. They are commonly held in precious metals IRA accounts, along with other popular gold coins such as the Gold American Eagles, Australian Gold Kangaroos, and Gold Buffalo coins.

Related: Our List of Top Gold IRA Companies For 2021

Canadian Gold Maple Leafs - a close look at the #gold coin popular with both #investors and collectors worldwide.

Until 2005, 1-oz Gold Maple Leaf coins came in tubes of ten, while the fractional-ounce coins come in sheets, with each coin suspended between layers of Mylar. However, Mylar tends to harden and crack over time. So those planning to hold these coins for extended periods should consider transferring the coins to shells.

Related: Gold Storage Options - How to Protect and Store Your Precious Metals

Gold is a “soft” metal. Pure gold is easily damaged even with basic handling. This is why many gold coins are made from alloys containing silver and copper: The addition of these two harder metals improves the coins' durability and resistance to scratching, scuffing, and wear and tear.

This has been an issue with GML coins, due to the high level of purity and their milled edges.

In the mid-2000s, the Royal Mint of Canada responded to the problem by switching to better packaging, encapsulating the 1-ounce coins in plastic in card form.

Those focusing on the investment value of these coins are generally best served by buying the standard 1-ounce versions. These coins sell at the lowest premiums compared to the fractional ounce coins. Generally, the smaller the coin, the greater the impact of shipping and handling costs and bid and ask spreads on the metal. So by focusing on the larger 1-ounce coins, you get more metal for your dollar.